Reaching for the Stars

The overall theme of this project was "constellations" -- but it involved so much more than dots of light in the sky.
Students were guided to make connections across disciplines as they integrated their knowledge of ancient Greek constellation myths. They practiced mathematical skills while graphing stars on coordinate planes, engineered LED lights and optic fibers, applied concepts learned during a unit on electricity in science, and developed a product which they marketed utilizing entrepreneurial skills.
Students stretched their imaginations and developed problem-solving and critical thinking skills as they learned how to apply concepts learned in class to a real-life experience.
This project began in the science lab where students practiced basic electrical skills such as wiring a closed circuit, installing a power source like a battery, and attaching a light bulb.
Science and Technology Integration Specialist Ms. Shannon Johnson divided the class into small groups coinciding with their zodiac signs, and the students built lightboxes displaying the star constellation for their particular sign. The stars were created by using fiber optic strands to make pinpoints of light, using only one bulb as the light source.
That was just the beginning.
During their Deep Dive week in the Makerspace, students created a new, fictitious constellation. Working in small groups, they used their birthdays and a number corresponding to their initials to plot the locations of their "stars" on graph paper, using the bits of data to locate the positions on the x and y axes. 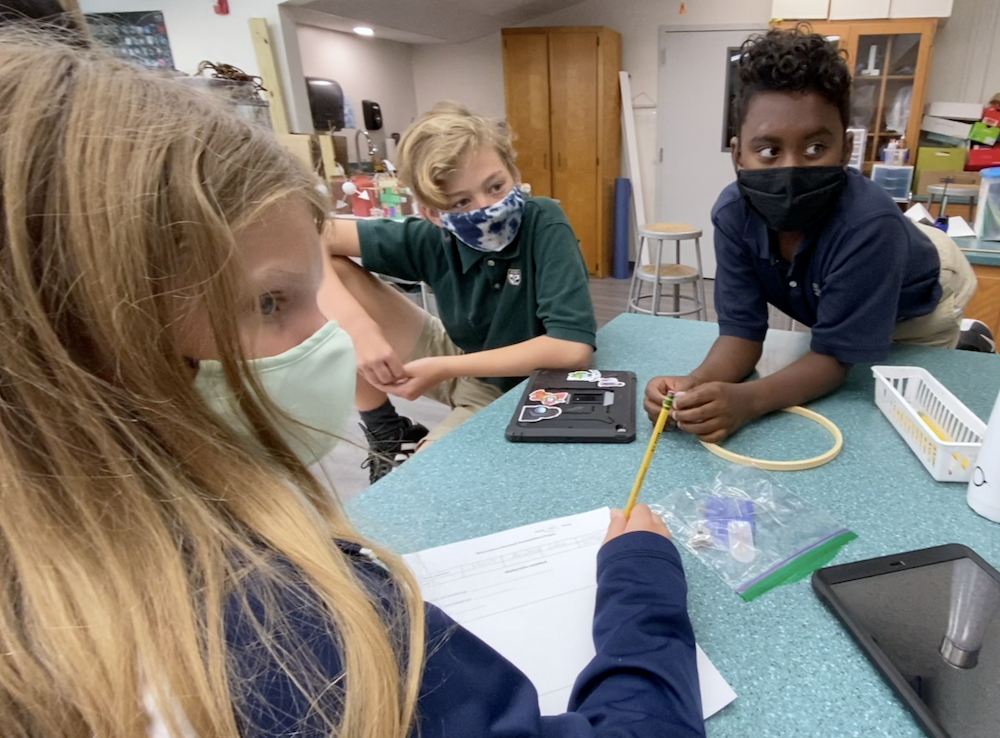 Once a dozen stars were located, the students literally connected the dots on the paper and tried to identify an object or animal that the lines suggested.
The group members found they really had to use their imaginations since the connected lines may only mildly suggest what object they may resemble. (Just like on real constellations!)
The next step in the project required the groups to create a story or myth to explain why their animal was in the sky. The students had previously read some Greek myths in Mr. David Sandlin's language arts class and wrote their stories using the Greek myths as a model.
"We were thinking of a coyote at first," said 5th grader Julia. "It did not turn out well. Then we were thinking and brainstorming and we got the lizard."
Julia's group -- which included Jack, Cole, and Abigail -- concocted a myth in which a lizard was trying to catch a fly, and an eagle carried the lizard up to the sky to catch the fly. The lizard remains in the sky to this day.
"Some of the groups found that it was easiest to write the story together with each group member giving input," said Mr. Sandlin. "Other groups found that it was more effective to discuss the "skeleton" of the myth as a group and have each member write their own version."
The students used Google Docs on their iPads to collaborate on their writing. 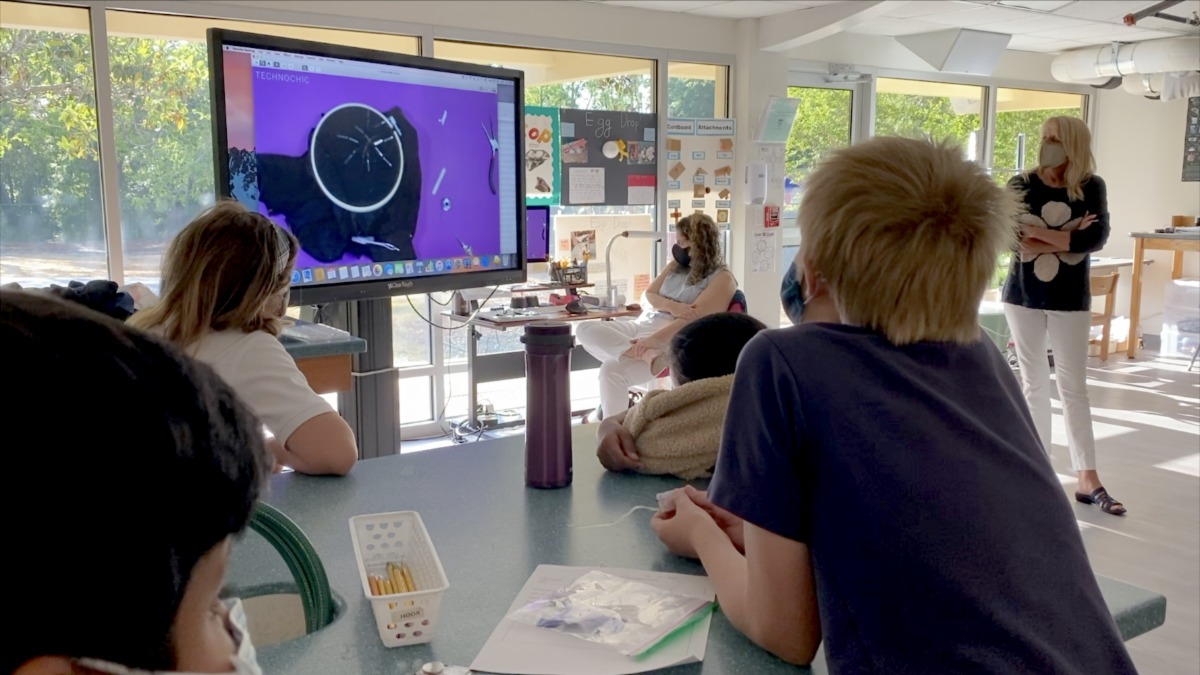 The final phase of the project was the entrepreneurial component. Each group came up with an idea for a product that featured their constellation and was something consumers may want to purchase. Many groups chose to make wearables such as t-shirts or hats. The groups were responsible for manufacturing a prototype complete with working LEDs to spotlight their constellations.
The students went  to work with Ms. Johnson and Ms. Cristina Knodel in the Makerspace to do some engineering. Again, there were many steps involved. Using their knowledge of electrical circuits, the students selected various colored LED bulbs and arranged them into a pattern resembling their constellation. They wired the LEDs to a battery, and when the apparatus is switched on, their constellations come to life! 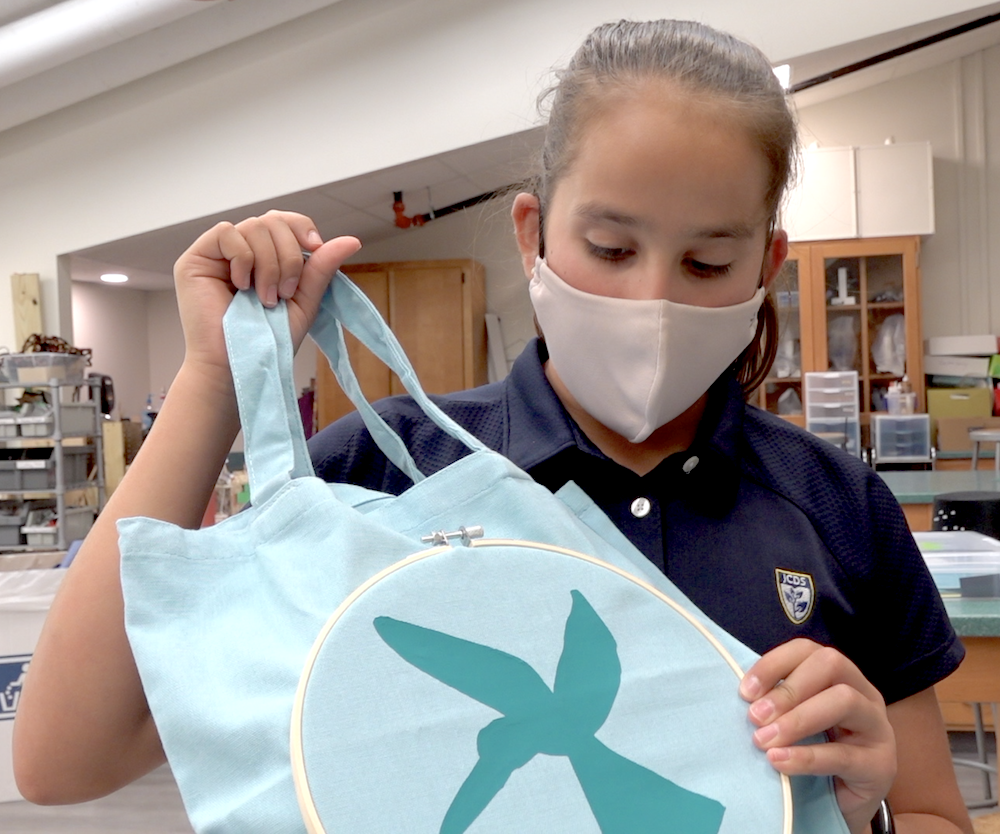 Finally, each group wrote and produced a commercial that showed their product and demonstrated its characteristics.
The entire project required several weeks to accomplish. Fortunately, most of the Makerspace portion of the project took place during their week-long Deep Dive, giving the students big blocks of time to work on their projects. The results were well worth the effort.
"When students connect concepts across disciplines to solve problems, learning becomes exciting and opened-ended, enabling students to dig deeper as they stretch higher-order thinking skills," said Ms. Finkenberg. "Students also learn to celebrate their perseverance, reflect on their process, innovate, and hone their interpersonal skills through team collaboration."
Back
1/1